blogshow django is beneficial for the existing python developers

Django is a high-level Python Web framework that facilitates speedy development and pragmatic and clean design. Developed by experienced developers, it takes care of much of the trouble of Web development, so you can concentrate on writing your app without wanting to reinvent the wheel. It’s free and open source.
In this post, we will discuss how Django is beneficial for Python Developers:

You should completely check Django. It is written in Python and Python is clean, amazing, simple to learn, and one of the most taught programming languages. Python is also the favorite choice for:

Without a doubt, the tech market is flooded with frameworks, but Django is a great place to start as it has the superior documentation and tutorials in software development. To start your Python career, you can join python online training in India.

BENEFITS OF USING DJANGO FOR PYTHON DEVELOPERS
Given below are some of the advantages of using Django Framework:

Fast: This has been created in a way to support the developers make an application as fast as possible. From idea, production to release, Django helps in making it both cost-effective and effective. So, it becomes an ideal solution for developers having the principal focus on deadlines.

Fully Loaded: It works in a manner that involves dozens of extras to help with user authentication, sitemaps, RSS feeds content administration, and much more such things. These features help in carrying out the web development process entirely.

Secure: When you are doing it in Django, it is assured that developers don’t commit any errors related to security. Some of the common mistakes include cross-site request forgery, SQL injection, click jacking and cross-site scripting. To manage efficiently usernames and passwords, the user authentication system is the key.

Scalable: To meet the heaviest traffic demand, the benefits of the Django framework can be observed. Hence, the most active sites use this medium to speedily meet traffic demands.

Versatile: Content management Scientific computing platforms, and even big companies, all these aspects are very efficiently handled by the use of Django.

Conclusion:
To master Django, you can consider joining Django online training in India, since by joining this training program you will learn basic as well as advanced concepts of Django. In the nutshell, Django supports developers to write custom web applications in Python by giving several tools, features, and plug-ins. Currently, Django is being used by different high-traffic sites like Google, YouTube, Pinterest, and Instagram. Although Django is related to other web frameworks have its own advantages and drawbacks. Thus, the Python developers must retain the exact requirements of every project while examining the pros and cons of Django to choose the best Python web framework.

Reason Why Python Is Used For Machine Learning Instead Of Java

Why PHP Certification Is Effective For Better Career Option? 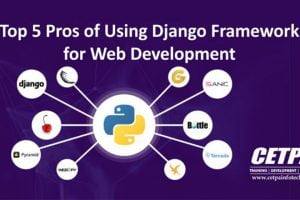 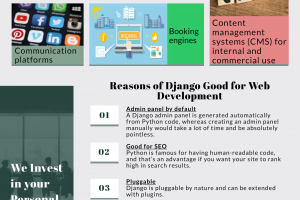